For over a century, Le Cordon Bleu has helped shape the careers of some of the best chefs around the world.


Le Cordon Bleu Ottawa in association with Postmedia and Canada’s 100 Best Restaurants, are pleased to announce the 3rd Annual Passion for Excellence Scholarship Award. This scholarship is a once in a lifetime opportunity to gain recognition for culinary talent and provide a stepping stone towards an amazing career.

To complete this outstanding prize, the winner will also carry out a one month paid internship under the guidance of esteemed Chef Yannick Anton at the renowned Cordon Bleu Signatures restaurant in Ottawa.

The Le Cordon Bleu Canadian Scholarship is available to any Canadian citizen or permanenet resident. Applicants must be at least 18 years old and have read and understood our terms and conditions before applying.

Record yourself with a smart phone or video camera answering these three questions:

Describe your favourite dish and how it reflects your passion for food… what would it be and why? What qualities do you have that make you the ideal candidate to study at Le Cordon Bleu? Upon completion of your training at Le Cordon Bleu what will your dream career look like?

The successful applicants will be contacted towards the end of August for the interview round.
The Final Cook-Off Competition will be hosted at Le Cordon Bleu Ottawa in November 2017.

A video recap of our Scholarship Finalists in action cooking up a storm in the kitchens. They had 4 hours to complete the final exam, The scholarship was determined through a four-hour cook-off between Gloria Otshudi and Kevin Morin, that pushed the contestants to their culinary limits. Each contestants had to prepare a three-course French meal which included a starter of hard-boiled eggs with creamed spinach au gratin, a main course of scallops with red wine, served in their shell and a dessert of Iles Flottantes consisting of meringue floating on crème anglaise.

A panel of judges scored the dishes based on five components: presentation, technique, taste, hygiene and organization.

Why Study in Ottawa

Le Cordon Bleu Ottawa Culinary Arts Institute is Canada's only campus for Le Cordon Bleu. Located in the heart of Canada's picturesque capital, Ottawa's rich history in gastronomy and flair for French architecture make it the perfect venue to invest in a premier culinary arts education.

Ottawa is Canada's capital, and the country's fourth largest city. It is located in Eastern Ontario at the junction of three majestic waterways. A bilingual city with a multicultural population including embassy representatives from around the globe, Ottawa offers all the cultural attractions and diversions expected in a world capital, but in a more intimate and comfortable setting.

Begin the most intensive and comprehensive training in classic French culinary techniques. This program combines the Diplôme de Pâtisserie and the Diplôme de Cuisine.

Master basic to advanced culinary techniques which can be applied to any style of cuisine. Explore French culinary tradition, cuisines and current trends from around the world.

Originally from the South of France, Chef Yannick Anton received his training at the Lycée Hôtelier de Nice.

He began his career with Chef Michel Devillers at L’Ane Rouge, a highly coveted Michelin star restaurant. It was there where he perfected his skill in the preparation of seafood, learning the most advanced culinary techniques. He continued in the region at the celebrated Hotel Martinez in Cannes.

In 1994, Chef Anton came to Montreal where he accepted a position as sous-chef of the restaurant Le Globe with Chef Martin Picard. He eventually relocated to the Ottawa area where he assisted in the opening of Le Baccara in what was then known as the Casino of Hull. In 2000 Chef Anton worked at the Westin Hotel with Executive Chef Philippe Wettel, and at Canada’s Department of Foreign Affairs and International Trade.

Chef Anton was appointed to Executive Chef of Signatures Restaurant in November 2006.

"Nothing brings me more joy than mentoring the next generation of culinary leaders and award-winning chefs. I look forward to working with the Scholarship winner and embracing the passion they bring to the culinary arts." – Chef Yannick American chef, author, and television personality. She is recognized for bringing French cuisine to the American public with her debut cookbook, Mastering the Art of French Cooking. 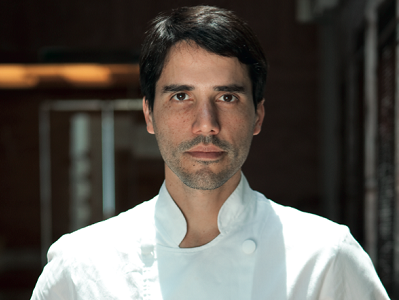 Peruvian chef and restaurateur with a Michelin star to his name. Virgilio is considered one of the new generation of Peruvian chefs promoting the spread of Peruvian cuisine with Lima's award winning, Central restaurant. He is now on Netflix Chefs Table. Ming not only cooks East-West but also lives East-West. Just as his food is all about finding balance and harmony.

Ready to start? Take the first step by clicking the button below

1. Describe your favourite dish and how it reflects your passion for food… what would it be and why?
2. What qualities do you have that make you the ideal candidate to study at Le Cordon Bleu?
3. Upon completion of your training at Le Cordon Bleu what will your dream career look like?